We moved into our detached house about 6 years ago. At that point the house had an oil boiler and radiators throughout. Looking back at my records, we used about 3000ltrs of oil per year to heat the house and even then, it was not warm all the time or in all places. It had single skin brick walls with some internal insulation

After several years, we decided to renovate. We had had an Air Source Heat Pump (ASHP) at our previous property and were very happy with it. So, as part of the renovation, we decided to install an ASHP to replace the oil boiler. We also made the decision to take out the radiators downstairs and put in underfloor heating. As a retrofit, putting in underfloor heating is quite disruptive.  All the floorboards had to be taken up (our belongings which were not suitable for the garage ended up upstairs which was cosy to say the least!), insulation was put between the floor joists, the underfloor was installed, then the flooring was re-laid.

Upstairs we kept the radiators but upgraded some of them from singles to doubles to ensure sufficient heat output. In the rooms that were being renovated, we also upgraded the wall insulation. I did have some concerns about whether the heat pump would be enough to heat the house (and hot water) by itself but several years in and we are fine. In really cold weather, we occasionally use a standalone heater in my husband’s office space, as he gets chilly sat down all day.

The main part of the heat pump is outside. Inside there is a controller, which is a box on a wall, a buffer tank, an expansion tank and a couple of pumps (which you would have with an oil boiler anyway). We also have a manifold, which the underfloor pipes come into but this takes up relatively little space on a wall in our understairs cupboard. As we were renovating anyway, we created a cupboard for all this and put our hot water tank in there too. These photos don’t show everything but should give you some idea:

If you are just keeping your radiators, there shouldn’t be too much disruption. Just piping from the ASHP outside, to the internal tanks and then connecting to your existing radiators (which will probably need a good clean out/flush to get rid of any gunk)

The ASHP is like a big fan. It looks like an air conditioning unit. When it is running, this is the sound that you hear. I don’t hear it from inside when it is going although I can hear the internal pumps (but then I could with the oil boiler too). We deliberately went for an ASHP that marketed itself as being relatively quiet. You can easily carry on a conversation next to it – although don’t stand in front of it as the air being blown out is pretty chilly!

The underfloor system takes longer to warm up (but it is so nice walking on a warm floor) but the radiators are fairly quick. They just never get as hot as with an oil boiler – hence why doubles are needed, rather than singles (or longer radiators).  You may also need to run the ASHP for slightly longer than with a boiler to keep the temperature up. But I have found, because the rads do not get so hot, the overall room temperature is much more even – no more hot and cold spots in the rooms. It is a slightly slower, but much more consistent temperature.

For various reasons, we have had problems making direct comparisons with our electricity costs before and after. However, I would say that we are paying slightly less for our heating now but with a much better outcome (the house feels much warmer, although we did upgrade the insulation while we were renovating too). Being on the correct electricity tariff is important and the more that you can insulate, the better, but that could be said for any heating really.

Downsides – Heat pumps are expensive (and underfloor even more so) to put in initially, although we will get about 70% of the cost back via the government RHI scheme.

– With the underfloor it is difficult to put a quick boost on the temperature if you come in and are really cold and want a quick warm up. However, that is more an issue with the underfloor than the heat pump. Radiators should be ok.

In summary, I love my heat pump and would not go back.

I am also involved in the Warmer Crowhurst project. The community response to the Warmer Crowhurst clean energy project has been great. Over 100 people completed the questionnaire and many more homes asked for the 50 free heat surveys, which were over-subscribed. All the information we provided will be turned into a feasibility study that should be available soon and we want to see real actions come from this. Crowhurst could be one of the first villages to take a big step towards its climate goals by switching to heat pumps and cleaner power.

On a related matter, Rother District Council has been given extra funding this winter to help with up to £250 for food and utility bills. The Household Support Fund is a fixed amount of money, so check early if you are eligible. The website is: https://www.rother.gov.uk/business/financial-support-for-residents/household-support-fund/ 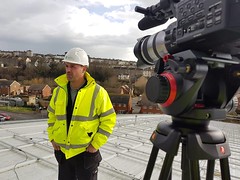